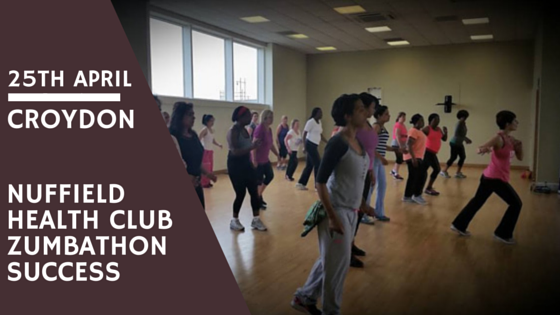 Anna also started the zumbathon by heading the first part which was an extra treat for all the participants – one of whom travelled from Bognor Regis to attend.

Anna recently appeared on the People’s Strictly and has used this opportunity to continue to raise awareness across the UK by visiting schools, colleges and workplaces as well as support groups that approach her as well as families that try and fight so hard for their children’s access to the right education and provision. Anna Kennedy OBE, Founder of Anna Kennedy Online says, “When we hear about autism related subjects on the news, it is always doom and gloom.

The zumbathon is one of many ways that Anna Kennedy Online uses to celebrate autism and showcase the capabilities and confidence that these remarkable individuals possess.

April is Autism Awareness Month, so the zumbathon, along with Autism Dance Day that was on Friday 24th April generated 3.86 million retweets on Twitter that raised so much awareness and was promoted by celebrities such as Jake Wood, Arlene Philips and the famous legends UB40.“There are so many talented people out there who are on the autistic spectrum, and both the Flash Mob and Autism’s Got Talent have provided a platform to not only showcase this talent, but to give the performers confidence and feel included in fun and unique activities. They also benefit greatly from the social aspects.” Anna continues. Anna recently visited Norbury Manor Primary School and Croydon Radio to continue awareness not just for April, but all year round every year.