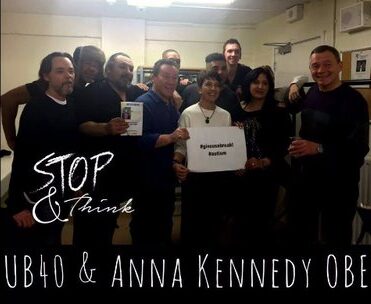 On 16th November 2014 Anna Kennedy Online were lucky enough to be invited as special guests to watch the legendary reggae stars UB40 in concert, with an opportunity to meet them backstage as they have been interested in supporting Anna Kennedy Online through the interest of Bernie Sawford an AKO supporter and a bass player and joint vocalist of The 142’s Band.

When Anna Kennedy OBE, Nela from Avalanche Studios and Mala Thapar Charity Champion arrived at Dorking Halls, they were shown to their seats which had a really great view of the stage. The atmosphere was building and the crowd were getting excited to watch the reggae stars in action and they were incredible live and the atmosphere was so relaxed and uplifting.

The concert was fantastic, with everyone up and dancing to old school to new releases; one track in particular was ‘Blue Eyes Crying in the Rain’ that was mesmerising to listen to. After the songs were sung and the crowds had left, Anna Nela and Mala met with the UB40 crew backstage. Such a lovely warm welcome was given, after two hours of non-stop singing – the band members were the most down to earth guys you could meet and despite being tired after their gig, they just wanted to know more about Autism and Anna Kennedy Online.

One band member had a child with Autism and knew too well how tough it can be on parents and how everyone needs a break and how important it is to make a difference and to continue raising awareness. Talks went onto Autism’s Got talent and how incredible talent could be tapped into with the right approach to the next generation in order to change the perceptions surrounding Autism and breaking down barriers in order to enhance acceptance and understanding.

Each member asked about Autism and the Give Us a Break campaign and was amazed by what the charity do in terms of raising awareness and how relentless the charity were in supporting this hidden disability that affects so many.

UB40 were very interested in meeting again and hope to collaborate with Anna Kennedy Online and continue to raise Autism Awareness together.

Please watch their video below: