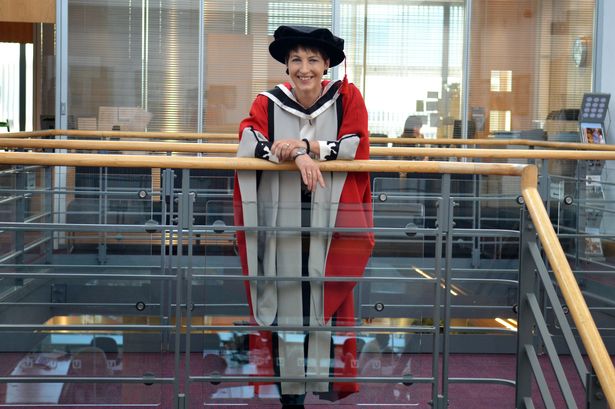 A lord and a very special campaigning lady received honorary degrees from Teesside University, alongside hundreds of graduates picking up their own awards.

Middlesbrough born and bred Anna Kennedy OBE, set up a school for autistic pupils in Hillingdon, after discovering her son Patrick, 23, had Asperger’s Syndrome, and her youngest, Angelo, 20, had autism. Anna and her husband Sean had to remortgage the family home to fund the project. Since then, the 52-year-old, originally from Longlands, has gone on to write a book about autism, set up a website supporting other parents and open a second specialist school and vocational college for young adults with autism.

Speaking of becoming an Honorary Doctor in Professional Achievement, the latest in a long line of achievements which have also included Tesco Mum of the Year, she said: “I’m really happy that it’s come from my home town. “I’m really honoured and humbled to receive such an accolade from Teesside.” Anna added she was pleased to hear about the university’s support for autistic students. She said: “I spoke to a young man with autism who is attending the university and was pleased to hear they are looking after him.

My nephew also just started at the university in September, so I’m looking forward to seeing him progress.” Anna’s life with her sons inspired her to campaign for better support and a voice for families affected by autism. And Hillingdon Manor School, which had 19 pupils when she first opened it in 1999, now boasts 150 pupils from 17 different local authorities.

She is also involved in anti-bullying campaign with the NSPCC and Childline and says: “I try to raise awareness about autism at all the events I go to. “I interviewed the Prime Minister earlier this year and gave him a really hard time asking why is it so difficult when a parent has a child with autism, to get a diagnosis and then support? Why is the process so difficult?”

Lord Crathorne also received the Honorary Doctor of Laws accolade. Among many external roles, he is chairman of the trustees of the Captain Cook Birthplace Museum in Stewart Park, Middlesbrough. The Lord Lieutentant of North Yorkshire is also a member of the House of Lords and is on the Lord Chancellor’s Advisory Committee on Justices of the Peace, North Yorkshire.   https://www.gazettelive.co.uk/news/campaigner-who-set-up-school-6351994

Share this:
NewsCampaigner who set up school for autistic pupils delighted at Teesside University honorary degree