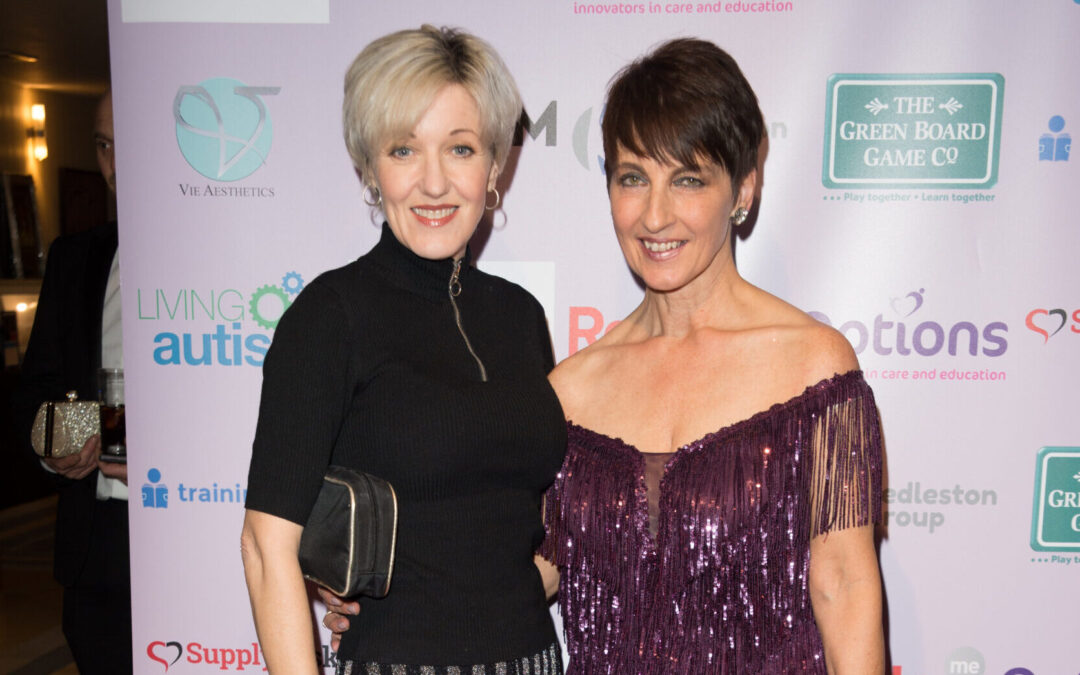 Kacey Ainsworth has been a Charity Patron and Ambassador for Anna Kennedy Online for six years. Kacey initially asked Anna for advice and then attended Autism’s Got Talent and was totally blown away by the performers and the work of the charity. Kacey over the years has been supporting the charities events, campaigns and recently a judge at the Autism Hero Awards.

Kacey has revealed she takes her autistic son onto the set of ITV’s Grantchester with her – after confessing she gave up acting for seven years following his diagnosis.

The actress has two children with partner Darren Hales – Blossom, eighteen and Elwood, fourteen who was diagnosed with autism when he was six years old.

Kacey, 53, previously admitted she made the difficult decision to cut back her workload so she could focus on supporting her son.

In 2019 she revealed she stopped acting for almost seven years – taking on just one job a year – to build a routine for Elwood.

But it seems the star, who played the character of Little Mo on the BBC’s flagship soap, has found a way to balance both her career and home life – by taking her son to work with her.

Kacey said: “I’ve taken him with me on set to work at Grantchester.

“He gets very nervous, but we talk about what is expected of him whilst on set and I don’t overwhelm him with too many people.”

Kacey has played the role of Cathy Keating in the ITV detective drama Grantchester since 2014.

Since his autism diagnosis, her son Elwood has gone on to thrive – playing football and hockey, as well as being captain of an amateur rugby team.

But the 53-year-old admitted she struggles with her teenage son’s “challenging” behaviour.

She said: “He’s now started secondary school. Any change is really challenging as is any behaviour that comes with the change.”

However, Kacey is positive that things are starting to get easier as Elwood adapts to his new routine.

She added: “His school have been absolutely fantastic keeping a very good eye on him and giving him time out space if needed.

“We had visited the school a huge number of times before he went so that also helped.”

The mum-of-two said having a routine is key in managing her son’s autism, but the family have had to adapt this as Elwood gets older and his needs change.

She previously spoke about how she wrote a script to help him settle at bedtime but admitted he had grown out of that now.

Kacey confessed the coronavirus lockdown came as a blessing disguise because it allowed her to control Elwood’s environment.

She said: “Elwood is now fourteen and in contrast to many families, lockdown was actually not too bad for him.

“Just being able to control his whole environment, all the time proved to be a good thing.”

Despite being so open about her son’s diagnosis, the actress confessed that she still struggles with the stigma and stereotypes surrounding the developmental disability.

She added: “Some people are so ignorant. They say, ‘he doesn’t look like he has autism’. Such a naïve view.

“I think there are things that parents should never ask other parents with an autistic child – things like if they too think they are autistic. Some things just are not appropriate.

“If I could change one thing in society for people with autism, it would be to just taking a moment to think about why someone may feel different to you.”

Anna Kennedy shares she is proud to have Kacey as one of her Patrons we work well together, and Kacey is a well-loved member of the Anna Kennedy Online family.

If you would like to attend the Autism Hero Awards on June 11th at The Chelsea Harbour Hotel tickets are available from www.autismheroawards.com.

Share this:
NewsKacey Ainsworth – an article by Emily-Jane Heap